Spimes: sustainable technology of the future

by Bruce Sterling
Bruce Sterling traces the evolution of things in this short book which contains his vision of ubiquitous computing and sustainability. He describes the evolution of things from artifacts, through machines, to gizmos (present day), to spimes (connected, information rich objects). His vision of an “internet of things” proposes to solve the problem of built-in obsolescence of current day objects whose manufacture, usage, and disposal are harming the planet. This book presents a futuristic view of objects which natively produce information that can be used for achieve sustainable design, fabrication, and recycling.

This book is about created objects and the environment…The ideal readers for this book are those ambitious young souls (of any age) who want to constructively intervene in the process of techno social transformation.

Sterling begins Shaping Things with a history of man-made objects starting with artifacts (made and operated with just muscle), to machines (built for a consumer society), to gizmos (electronically enabled devices of our current era), to spimes (an advanced form of object which is fabricated by digital means and is built to be connected and managed by a global communication network), to biots (biologically engineered objects available in 2070). Each phase has a corresponding set of human relationships–artisans for artifacts, consumers for machines, gizmos have users, and spimes have “Wranglers”.

He uses the wine bottle on the cover of the book as an example of this evolution. Although the wine has a history of being produced by hand, it now comes in a bar-coded container with URLs on it through a sophisticated global supply chain to a consumer and invites an on-line relationship with the producer. Successive technological eras do not entirely replace previous ones; each successive layer gradually compress the lower strata. It is this complex coexistence of means of production and consumption that leads to many of the ecological challenges of today.

Sterling weaves together many threads in the book which is part history, part prediction, and part rumination on our current technological society. Sustainability, environmental survival and the management of waste provide the backdrop for his thoughts. The capabilities of future objects are not ends in themselves or merely the endpoint of technological progress–they are the ways in which these objects can be fabricated and disassembled in a way that does not harm the planet.

There are several key technologies which contribute to this vision of the future: RFID, GPS, search, CAD, digital fabrication, and recycling. Each of these situate the spime within a global network that can be located, managed, and responsibly removed from service. He calls the typical product lifecycle a double “S-curve” which he portays as “obsolescence is innovation in reverse”. Sterling argues for infusing the typical product lifecycle with more intelligence and ending with a non-toxic de-commissioning of the object.

Spimes are the intersection of two vectors of technosocial development. They have the capacity to change the human relationship to time and material processes, by making those processes blatant and achievable. Every spime is a little metahistory generator.

Because spimes can monitor, track, and document themselves through time, he believes that the information rich environment created by these converging technologies, particularly recycling, will enable us to live sustainably with our objects. Spimes are depicted as intelligently self-disassembling. As each object sheds data about its position, state, and operation it creates an infinitely exploitable resource for information mining. This is one of the promises of big data. Metahistory here refers to the way that spimes write their existence/history in streams of data. Sterling believes that by harnessing the power of this massive volume of data, designers will be able to create better and more sustainable objects. For example, rapid prototyping and accelerated design processes can be supported by this wealth of information about how each object is used, succeeds, or fails. He calls upon designers as those who can realize this vision technological sustainability.

This whirring, ultra-buzzy technology can keep track of all it’s moving parts and, when the time comes, it would have the grace and power to turn itself in at the gates of the junkyard and suffer itself to be mindfully pulled apart…If it’s to be any use to humankind, it will have to get done. I hope that you’re the kind of person who can do it. 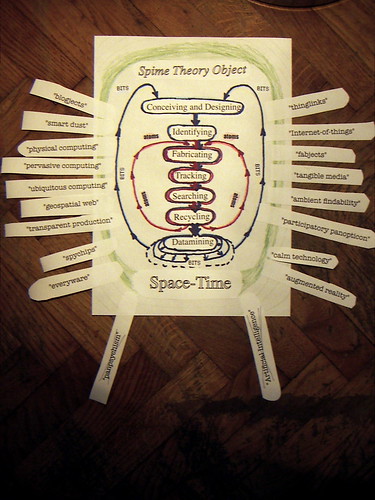 In this video from the Lift 2009 conference, Sterling reflects on his spime / internet of things theory four years after the publication of Shaping Things and five years after he wrote it. He uses the diagram above to describe his theory and evaluate the realization of the six core concepts. He observes that plans are now highly digitized (conceiving and designing), the RFID industry has not taken off as he had predicted (identifying), fabrication is a major industrial force, tracking is gaining adoption quickly and has some very sinister aspects, searching infrastructure is reaching further and further into our lives, recycling and garbage management continues to be problematic for the environment, and virtualizing physical “pipes” may never happen.